Data retention notice: Only the address you choose to save and its corresponding latitude/longitude are stored as a cookie on your device for a period of one year. Because your saved location is stored on your device and not our servers, you will have to save your location seperately on each device you want to use MyAlbany on.

System Development Charges (SDCs) are one-time charges assessed on new development (growth) to pay for the costs of expanding public facilities. Growth creates additional infrastructure demands; SDCs provide a mechanism to allow new growth in a community to pay for its share of infrastructure costs rather than existing taxpayers or utility ratepayers.

The idea behind SDCs is that long-time residents have “paid their way” through property taxes, utility rates, and other means for the systems that are already in place. If those systems need to be expanded to accommodate growth, it is not paid for at the expense of the existing population.

Albany has only established SDCs for water, sewer, parks, and transportation, but not for stormwater. Only residential development pays the Parks SDC.

Albany’s authority to establish SDCs is contained in Chapter 15.16 of the Albany Municipal Code. The original water and sewer SDCs were established in 1991, parks SDC in 1993, and the transportation SDC in 1994.

Current SDC resolutions and a history of each SDC can be found on the Council Policies page:

What do SDCs pay for?

State law authorizes SDCs collection for growth-related expansion of water, sewer, parks, transportation, and storm water management systems. In 2007, the Legislature prohibited the collection of SDCs for schools but allowed school districts to assess a “construction excise tax” in their place. The Albany School District collects such a tax on new development.

How much is the cost of new growth?

It varies among each community, which has its own unique characteristics. The City of Albany has adopted master plans outlining the improvements needed to its water, sewer, parks and transportation systems. These master plans form the basis for the City’s SDCs.

Are there limits to what can be charged for an SDC?

Yes. State law has strict provisions that require a city to develop a formula, or “methodology”, which takes into account the value of existing or planned capacity in the infrastructure system to serve new development. Oregon law allows that an SDC may include a reimbursement fee, an improvement fee, or a combination of the two.

The reimbursement fee is based on the value of available reserve capacity for capital improvements already constructed or under construction. The methodology must consider the cost of existing facilities, prior contributions by existing users, the value of unused capacity, grants, and other relevant factors.

The improvement fee is designed to recover all or a portion of the costs of planned capital improvements that add system capacity to serve future development. The methodology must be designed in a manner that SDCs will not exceed the growth-related costs from the capital project list.

How are SDCs calculated?

The Albany City Council has adopted resolutions that establish the methodology for calculating the SDCs. For the improvement fee, the resolutions include the project lists from the master plans, updated cost estimates for each project, and an apportionment of the cost for each project to new growth. For the reimbursement fee, the resolutions include the existing system’s facilities with available reserve capacity, minus the value of any grants, developer contributions, local improvement district revenues, and property tax-supported debt principal, and an apportionment of the value of each project that is available to serve future customers. The resolutions also describe how the SDCs are calculated and contain the SDC schedule.

What can revenue from SDCs be used for?

Reimbursement fee revenue may be spent only on capital improvements associated with the system for which the particular SDC is assessed including expenditures relating to repayment of indebtedness.

Improvement fee revenue may be spent only on capacity-increasing capital improvements on the project list (refer to each methodology), including expenditures relating to repayment of debt for such improvements.

Is there an appeals process?

Yes. The methodology and SDC applied in a specific instance may be challenged. The appellant must submit a written statement proving that the determination being appealed is incorrect and what the correct determination should be. An appeal of an SDC based on an established methodology must be filed within fifteen (15) working days following the date the contested administrative decision was made.

When are SDCs paid?

SDCs are generally due at the time a building permit is issued, along with any other associated fees owed to the City.

Yes. In accordance with State law, Albany has provisions for a person to make payment arrangements for their SDCs with acceptable security, typically by a lien placed on the property.

How much will I need to pay for my SDC charges?

SDC charges are calculated on a case-by-case basis depending on many factors including water meter size, sewer fixtures, new roadway trips added, and building size. We can give you an estimate and you can also look at the fee resolutions.

Can I receive a credit against my SDC improvement fee for the construction of a qualified public improvement?

Yes. A “qualified public improvement” is a capital improvement that is required as a condition of development approval, identified in the capital plan and project list adopted in the methodology and either:

On-site: an improvement located in whole or in part on or contiguous to property that is the subject of development approval and required to be built larger or with greater capacity than is necessary for the particular development project to which the improvement fee is related; or

Off-site: an improvement not located on or continuous to property that is the subject of development approval.

This credit is only for the improvement fee charged for the type of improvement being constructed, and only for the cost of that portion of such improvement that exceeds the local government’s minimum standard facility size or capacity needed to serve the particular development project or property.

The credit shall not exceed the improvement fee eligible amount for the associated project on the SDC funded projects list in the methodology. If the credit exceeds the amount of improvement fee to be paid by the development, the excess credit may be applied against improvement fees that accrue in subsequent phases of the original development project.

Are there other opportunities to receive a credit against the SDC improvement fee?

Other credits may be allowed as specified in each utility fee resolution. For example, a credit against the improvement fee portion of the transportation SDC may be possible under approved assurances that the development will materially reduce the number of trips estimated by ITE.

Impact of SDCs in Albany

What can be said about the impact on building permit activity as SDC fees are adjusted?

The chart below (developed in 2009) shows the number of Albany building permits issued each year and the total SDC fee charged a single family residence. 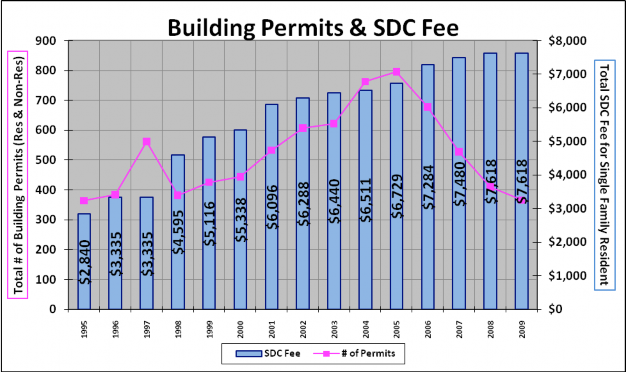 How do SDCs in Albany compare to other Oregon communities?

The most recent SDC study with comparative cities was developed by the League of Oregon Cities (LOC) in 2007. The following chart shows Albany’s placement in 2007 when comparing the total SDC fee for a single family residence to other Oregon cities in the LOC survey. 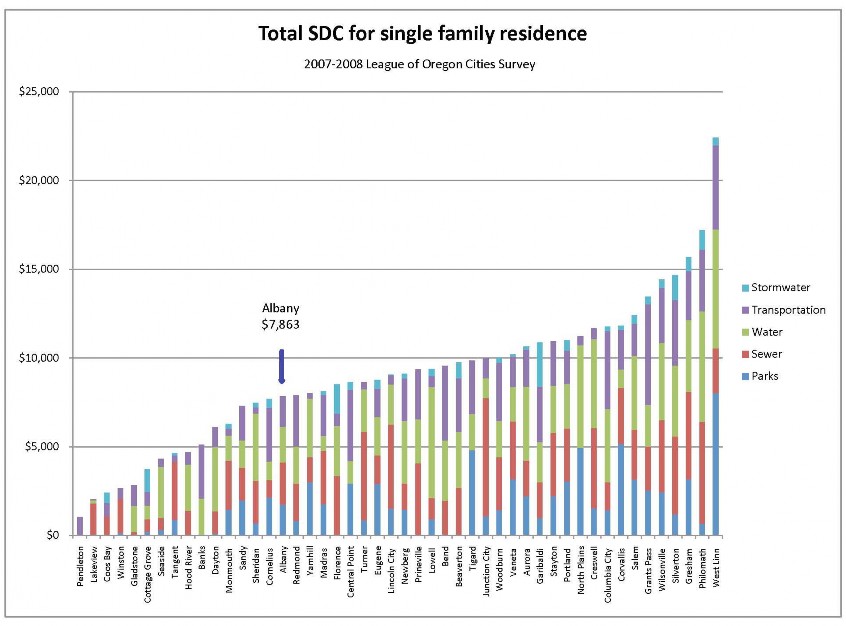